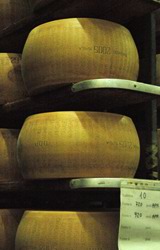 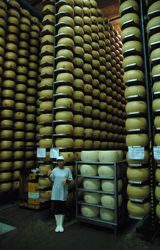 However, the "true" Parmesan cheese, more correctly known as "Parmigiano Reggiano" [ The King of Cheeses ] is only made in a precise "zona typica" in central Italy which includes the provinces of Parma, Reggio Emilia and Modena, Mantua on the right bank of the Po river and Bologna on the left bank of the Reno river.

There, in 650 small factories called "casellos", skilled cheese makers use a traditional method that has changed little since the 13th century to produce between 4 to 10 cheeses a day per castello. It is very much a matter of quality rather than quantity!

To make each 35kg "wheel" of Parmigiano Reggiano requires 560 litres of highest quality whole milk delivered fresh, each morning and evening from nearby dairies; un-homogenized and with its natural flora intact. The evening milk is allowed to rest overnight in trays and the morning milk is used after it has rested for about one hour.

First a portion of the naturally accumulated cream is skimmed off and the evening and morning milks are mixed together in a copper kettle shaped like an inverted church bell. Then an aliquot of natural whey [ which contains lactobacilli ] is added and the milk is slowly heated to 33°C with constant stirring to cause partial fermentation and to raise its' acid content.

The heat is then turned off and natural rennet is added, after which the mixture is allowed to coagulate for 12-15 minutes to form curds. The curds are then broken up manually using a sharp-edged tool known as a "spino" [ thorn-bush ] to create fragments the size of wheat grains which are "cooked" by slowly heating them to 45°C, followed by rapid heating to 55°C.

The batch is then cooled to allow the cooked granules to precipitate in the bottom of the kettle and after about half an hour the cheese is scooped into a sieve-cloth with a wooden paddle. It is then placed inside a circular wooden mould called a "fascera" which gives the cheese its characteristic "wheel" shape.

After draining for a few hours the cloth is removed and the freshly made cheese is branded with the words "Parmigiano-Reggiano" to designate its pedigree. It will remain in the fascera for several days resting on its' flat ends with frequent turning until set, after which it will be immersed in brine for 20-25 days.

The final stage is maturation, which takes place in a temperature controlled storehouse called a "cascina" where the cheeses are stored for approximately 1 year on massive wooden shelves with regular brushing, turning and checking. Each cheese is graded and a wheel is designated ready for market when it makes a characteristic vibration when struck with a small hammer.