the story of rocquefort cheese 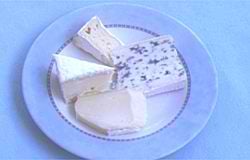 According to the stories and legends of the Roquefort region in south central France--about 2000 years ago a young shepherd tending his sheep high in the Causses [high arid mesa's similar to those in Arizona or Mexico], was concerned about the effect of the fiery sun on his lunch of rye bread, white sheep's milk cheese and apples. He noticed that along one side of this mesa there was a high mass of rock, known today as Mount Combalou, tunneled with many dark caves. The shepherd climbed up and left his lunch on a cool ledge in the deep shade of one of the caves, safe from the sun.

Shortly afterwards his flock was attacked by a wolf and he forgot about his lunch altogether until three months later he climbed back into the cave. He was not surprised to find his bread and apples moldy and inedible, but the white cheese was interestingly shot through with jagged blue/green veins. When he tried this strange cheese which had remained perfectly soft he found it had an interesting aroma and a faint nutty, definitely tangy flavour. He took this cheese home. All his family enjoyed it as well. Roquefort was born.

The cheese gets its name from the fact that only Mount Combalou was found to have the power of creating the blue/green veins. Other caves some only a mile away had no effect. Since the cheeses came from a fortress like rock it was simply called "Roc Fort".

The veins are in fact caused by the "benign and noble" mold, Penicillium roquefortii which is apparently found nowhere else in the world.